The RTDS is a special purpose multi-processor computer system that is optimized for power system simulations. It is designed for real-time simulation, which means that the computation of the simulated system advances one moment in each moment of wall-clock time. The real-time processing and the large number of input-output channels facilitate hardware-in-the-loop simulations, wherein a software simulation interacts in real time with physical equipment, such as the dynamometers or the 5 MW power electronic based variable voltage source (VVS) in the CAPS facility. As an example a superconducting cable, power electronics converter, or motor can be loaded and its thermal response investigated using real time loading profiles as occurring in the electric utility industry or shipboard power and propulsion systems. In return, the equipment connected in this manner to the “virtual” system will also interact with it in a realistic way.

The value of the integrated advanced prototype test facility and real time digital simulator has been demonstrated in the extensive full-power and dynamic testing and characterization of a 5 MW high temperature, superconducting motor manufactured by American Superconductor and Alstom Power as a prototype for the U.S. Navy. Future plans call for testing of a new 10 MVA STATCOM design targeted for use in voltage control and reactive power support in a portion of the northwest power grid.

The CAPS RTDS system is composed of 14 “racks” — each rack consisting of a number of parallel processing cards, including cards for running the simulation as well as inter-rack communications (IRC), workstation interface (WIF), and I/O cards. Simulation processor cards can consist of Analog Devices SHARC digital signal processors, three to a card (3PC), RISC-based processor cards (RPC), and a specially designed card for very small-time step real time solutions, the gigahertz processor card (GPC). Together, the entire 14-rack CAPS system is capable of over 110 billion floating-point operations per second (111 GFLOPS). 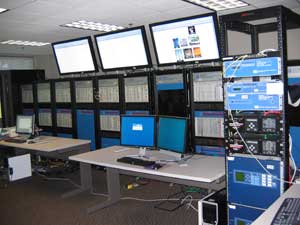 The RTDS can solve electrical system models in real-time at time-steps down to typically 50 micro-seconds, with solutions for portions of the system possible at time-steps down 2 of 12 to typically 1 micro-second utilizing the GPC cards. The GPC capability makes possible the accurate real-time simulation of fast power electronics switching devices. Electrical networks and associated controls or other mathematically represented systems are all simulated in real-time. The electrical network portion of the model is solved using “electromagnetic transient program” (EMTP) methods. Each rack can solve a 54-node electrical network, for a total of 756 electrical nodes in real-time (plus associated controls and other systems) with all 14 racks.

CAPS’ RTDS includes a large amount of analog and digital, isolated and non-isolated I/O, allowing real hardware to be interfaced into multiple points within the simulation. This I/O integrates the CAPS test bed systems, such as the 5 MW and lower power dynamometers and converters, with the simulator, while substantial I/O remains available for other equipment to be integrated for experimentation.

CAPS also has developed and demonstrated the capability to interface the RTDS to control equipment digitally in real-time via FPGA based MODBUS-type interfaces. For example, one of these interfaces is being used for remote collaboration with another research institution via high-speed internet connection. Thereby, an RTDS simulation running at CAPS is serving as a virtual electric power grid for a SCADA-type control systems located at a national laboratory.